Terri DelNegro has been imagining and creating since she was a little kid. She has tried her hand in multiple media - working her way up from crayons and finger paints to oils and acrylics. Her current, less messy passions are photography and computer graphics. She loves blending fantasy and reality to create captivating pictures to delight viewers of all ages.

Terri is a lover of animals of all kinds. Over the years, she and her husband have lived in upstate New York with a bevy of cats and dogs - which make far better lap pets than giraffes and sea otters. Of course, if one found its way to her porch, she would probably take it in and buy a bigger couch.

Cameras contained film that had to be developed with lots of smelly chemicals.  Then, using a big machine, in a room lit with only a dim red light, you would transfer the invisible image onto a piece of special paper. After soaking the paper in some even smellier chemicals, the picture appeared. It seemed like magic.

Of course, Pepper was one of my frequent subjects, and I quickly learned how to stage funny poses. For one picture, I put her favorite toy behind a propped up storybook. As she stared down at the book, waiting for the toy to reappear, I snapped the photo. This was my first attempt at capturing an animal in a human situation. 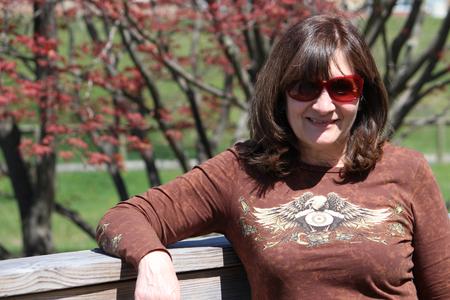 During my years growing up, my mother was a photographer. I was always either posing for her camera or taking my own pictures and then developing the photos.   You see,  a long time ago, photographs didn't just come out of your home printer.

The first household pet that I really considered mine, was a black cat I named Pepper Kitt. She moved in when I was only eight years old.

I had forgotten about these early efforts until after I finished work on “A Friend for Macaroni”. I suddenly realized the book's style was similar to things I had created decades earlier. You just never know what influences from your childhood will resurface later in your lifetime.

When you unleash your imagination, who knows what wonders you'll find?

A few years later, for a school project, I created a book called, “Animal Thoughts”. I mounted various photos of animals onto black paper. Then, based on their expressions, I added what they may have been thinking at that moment. Again, trying to humanize the animals. 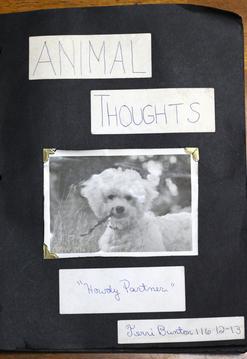 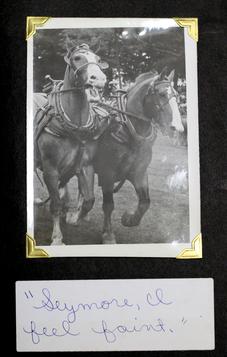 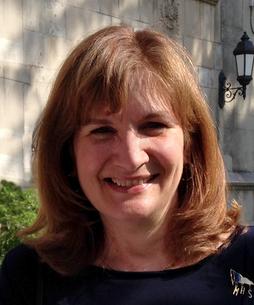